Think you know college sports? Brag House gives players a FREE chance to test their sports acumen to win cash and prizes. To get ready for each week, our in house expert Shea Freeman analyzes each AP Top 25 team and what to expect for the weekend; gives you his picks and predictions; and tries to help make sense of the crazy weekend that just happened. Make sure you subscribe now for Brag House launch details and to get on the right side of the week!
Well, it’s finally here… the college football season has come to an end and now… Bowl Season begins! With 41 games set for the next few weeks, the holidays are going to be jam packed with football games to keep you warm during the winter. Some of them are pointless, sure — does anyone really care about the Tropical Smoothie Cafe Frisco Bowl? — but who cares! This just means you can win some more brag bucks to close out 2019!
For my final takeaway of the year, I’ve decided to change the format a little bit. I’m going to give some takes, a couple of predictions and a preview of what’s to come for the weeks ahead. Let’s dive in!

1. The committee finally got the right four teams! For the first time I can remember, I agree 100% with the four teams the were selected and can’t find anything wrong with the seeding. Some will say that Ohio State is better than LSU — but what about Clemson fans? They’re the reigning national champs and have won 28 straight games… shouldn’t they be the top team to defend their title? No one is going to dispute that Oklahoma earned their right to play and their Peach Bowl matchup with LSU is just as enticing as Ohio State vs Clemson in the Fiesta Bowl.
About that Fiesta Bowl showdown… wow! This is a hell of a first round matchup! Two of the most dominant teams as far as point differential squaring off for the chance to slow down LSU’s juggernaut offense (or Oklahoma if something crazy happens). The prospects of these matchups and potential championship matchup are some of the most exciting in recent memory. If there’s one prediction I’m going to nail this bowl season, it’s that this is going to be a Playoff for the Ages.

2. Juiciest non-playoff matchup of bowl season I’ll make this a two part answer because obviously the best non-playoff game of the bowl season is Michigan vs Alabama in the Citrus Bowl on New Year’s Day. Two of college football’s most storied programs. Two big name coaches looking to end a disappointing season on a high note. Whether or not this is Jim Harbaugh’s last game is yet to be known, but you gotta think both teams will be fired up after losing to their rivals to end the regular season. Plus it’s Nick Saban… the guy is gonna make sure his crew is ready for any big game, even if it’s not a playoff game.
The non-New Year’s Day game I’m really interested in is the Cotton Bowl between Penn State and Memphis. The Tigers have had one of their best seasons in program history, winning the AAC and only losing one game this season behind a high-flying offense. Their head coach, Mike Norvell, just accepted the Florida State head coaching position and the Cotton Bowl will be his last with the team. Penn State has the type of team that can slow down Memphis, and these two conflicting styles make for a really intriguing matchup… right before the first two playoff games (all three on Dec. 28th).

3. Dumbest bowl game names One of my favorite things to do every bowl season is find my favorite dumb bowl name. Part of me hates the idea of having 41 of these games — seriously, why are we celebrating two 7-5 teams battling it out for the chance to win the FBC Mortgage Cure Bowl? That’s a real game that Liberty and Georgia Southern are going to play for our viewing pleasure, because the cynic in me sees no reason why any of these guys would be excited for that participation trophy.
But I’m not here to bash the teams; I just think some of these games are pointless. So to help make it fun, they give them these ridiculous names. Here are a few of my favorites:
* Bad Boy Mowers Gasparilla Bowl: UCF vs Marshall — Such a ridiculous name, but shout out to my hometown of Tampa!
* San Diego County Credit Union Holiday Bowl: USC vs Iowa — Quite a mouthful of a title for two teams with a combined seven letters.
* Ticketsmarter Birmingham Bowl: Boston College vs Cincinnati — Something called “TicketSmarter” is sponsoring an Alabama themed bowl with no team from Alabama.
* And my favorite… the Tony the Tiger Sun Bowl: Florida State vs Arizona State — Not Frosted Flakes… just Tony. So there will be three mascots in this game. Amazing. They missed a great opportunity to call this the Cereal Bowl.

4. Best brags of the holiday season Because there are 41 games that means there are at least 41 different brags you can win. The question is which brag makes the most sense. After all, when you’re bragging you wanna be able to back it up, right? You don’t brag about something you can’t prove. So I’ve taken the liberty of picking a few brags that you can roll with if you aren’t sure of where to look. Don’t worry, though… my Bowl Prediction Special will have you covered for each game! Here’s a preview:
Anthony Gordon (QB, Washington State) will throw for over 400 yards against Air Force: A lot of the QB talk this season has been about Joe Burrow and while no one is going to dispute his Heisman-worthy season, he’s not even the nations leading passer. That would be Gordon, who has 5,228 yards — 500 more than Burrow, who’s sitting in second place. Air Force has a stingy enough defense, but the Cougars heavy Air-Raid attack means Gordon will have plenty of opportunities to sling the ball down field.
Chuba Hubbard (RB, Oklahoma State) will rush for over 100 yards against Texas A&M: Chuba Hubbard, in my opinion, will be a Heisman contender next season. The sophomore was a workhorse for the Cowboys and has rushed for over 100 yards in all but one game this season — a week 2 win in which he had 8 carries for 44 yards in a blowout win. He has rushed for over 200 yards in four games this season, so this one feels like a no brainer — even if the Aggies defense is pretty decent against the run, Hubbard will no doubt reach 2,000 yards on a very impressive season (he needs only 61 to do so).
Georgia’s defense will hold Baylor to under 100 yards rushing: This one is a bit of a long shot but here’s how I see it: the Dawgs have a historically good rushing defense, allowing only one rushing touchdown on the year. They held Auburn to 87 yards, Florida to 21 and Texas A&M to -2. Now, it’ll be interesting to see what the Bears do at QB and that could make them rely on the run, but Georgia has the playmakers upfront to keep the rushing total in double digits.

5. Predicting the Heisman: Last but not least, over the course of the season I wrote a couple pieces on some Heisman hopefuls and four of them were selected on Monday as finalists for the award, given this Saturday in New York City. LSU QB Joe Burrow leads the pack, receiving every first place vote except for one — for Ohio State edge rusher Chase Young. His teammate, QB Justin Fields, and Oklahoma QB Jalen Hurts are among the finalists as well. Young would be the first defensive player to win the award since Charles Woodson did it in 1997. Hurts would be the third Sooners QB in a row to win the award, an unprecedented feat in college football. But let’s be honest... we all know who’s going to win.
Joe Burrow has been lights out all year, last week setting the SEC single season record for touchdown passes and picking apart a very good Georgia defense. He’s the best player on the best team in the country. He completed 77% of his passes and led the nation in passing touchdowns, was 2nd in passing yards and had the 2nd best QBR — doing it against a gauntlet of a schedule including Floria, Auburn and a big upset win at then top ranked Alabama. Burrow would be seventh SEC quarterback to win the award, the first since Johnny Menziel in 2013-14. Seeing as how he got nearly every vote, it wouldn’t surprise me if it was a unanimous choice although it won’t be. Still, it’s hard to see anyone else winning the award but #9 for the Tigers.
Be on the look out for my Bowl Season Picks, a complete in-depth look at what to expect for each game. There are a ton of chances to win some BragBucks before the season ends and in addition to picking each game, I will give you “something to brag about” and tell you which player to be on the look out for. If you want to go against me, there’s a chance for that! Look for a few of my favorite brags on the BragHouse app, which if you don’t have it... what are you doing! Get on that!
Happy Bowl Season, it’s been fun!
SF
I love sports. If you’re reading this then you share that same sentiment. There’s nothing quite like watching your favorite team go up against a rival or compete for a championship. It gets even more fun if you can win cash or prizes because of your knowledge! But, do you know what’s better than winning money? Not losing money. Not even having to risk a dime actually! What a concept! We at Brag House think so too! Thus, we have made it easy and accessible for fellow bragger both new and experienced. Worried about losing your hard earned money on a close game? Forget about it! At Brag House, the only currency you need to worry about are Brag Bucks, which we supply, and, of course, bragging rights. So subscribe now to be the first to download when we go live Nov 5th -- and we will give you Brag Buck! Invite your friends or challenge that co-worker you don’t like - And we will give you Brag Bucks! It’s so easy your grandmother could do it, and after she beats you in a head to head matchup maybe she’ll send you some Brag Bucks for Christmas.
Share
0 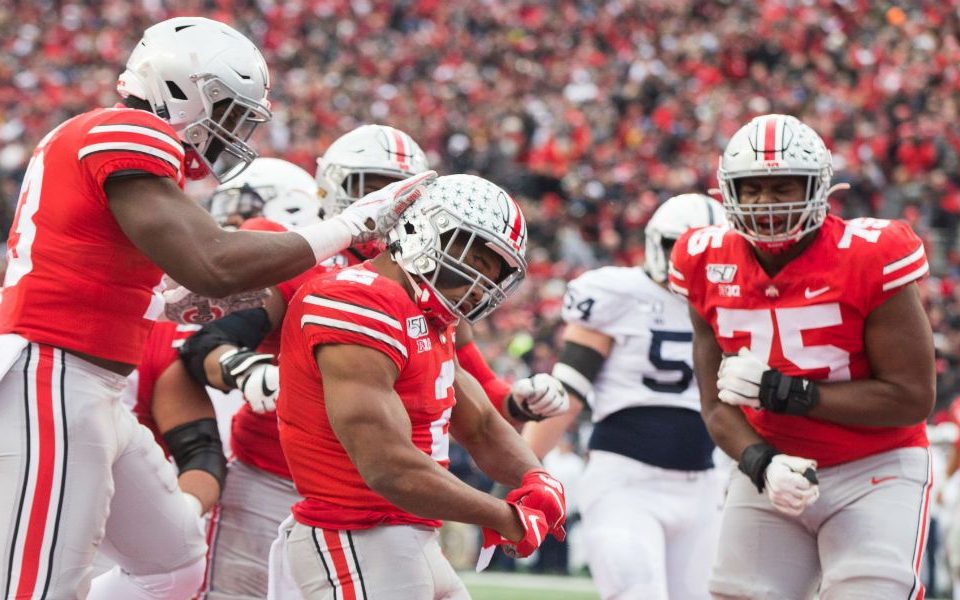