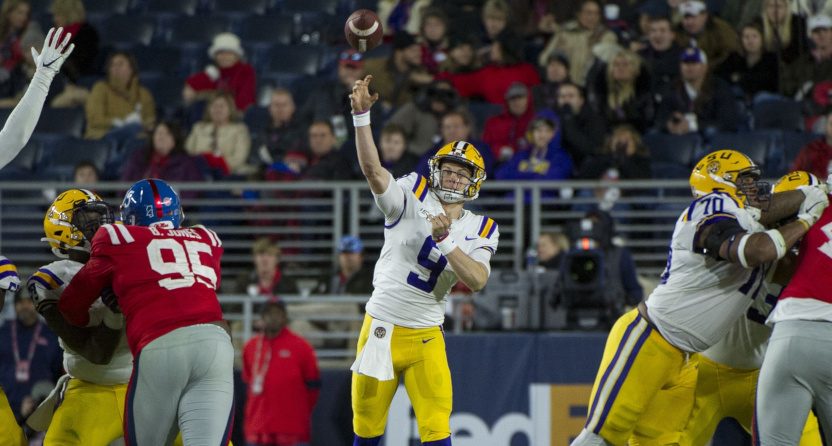 Think you know college sports? Brag House gives players a FREE chance to test their sports acumen to win cash and prizes. To get ready for each week, our in house expert Shea Freeman analyzes each AP Top 25 team and what to expect for the weekend; gives you his picks and predictions; and tries to help make sense of the crazy weekend that just happened. Make sure you subscribe now for Brag House launch details and to get on the right side of the week!
1. LSU 2. Ohio State 3. Clemson 4. Georgia 5. Alabama 6. Oregon 7. Utah 8. Penn State 9. Oklahoma 10. Minnesota 11. Florida 12. Wisconsin 13. Michigan 14. Baylor 15. Auburn 16. Notre Dame 17. Iowa 18. Memphis 19. Cincinnati 20. Boise State 21. Oklahoma State 22. Iowa State 23. USC 24. Appalachian State 25. SMU

1. Which team(s) are a lock for the CFB Playoffs? Clemson still feels like a virtual lock at this point. I don’t think there’s a team in the ACC that is going to beat them let alone compete with them. LSU and Ohio State would both need to lose a game plus their conference title games for me to lose confidence in them, as well. LSU, in particular, would make it in regardless of what happens in the SEC Championship game based off resume alone. However, and I’ll get to this soon, Ohio State is not quite a lock yet — not even for their own conference championship, as wild as that is to imagine.

2. Which team gained the most traction this week? I don’t think anyone really gained any traction, aside from Georgia and Oklahoma. Georgia really needed that win at Auburn to solidify their fourth place position, while Oklahoma jumped into the top 10 with their comeback win against previously undefeated Baylor. Is that going to be enough for either exam to make it in — or in Georgia’s case, stay in — the top four at the end of the year? If I had to pick a team I felt more confident in, I’d say Georgia but only if they win the SEC with one loss. They’ve been in this dance before and they play in a tough conference with a tough schedule, plus a win over LSU would almost certainly punch their ticket.

Oklahoma would have to finish out super strong and blowout whoever they face in conference championship, although it does help that they have a legit Heisman candidate in Jalen Hurts. Their defense is atrocious, but if LSU and Oklahoma were to face off in the first round of the playoff who’s really going to complain about that matchup? Burrow vs Hurts! There could be 120 total points scored in that game.

3. Which team took the biggest hit this week? This is a two part answer. From a team perspective, it’s Baylor. After looking like a legitimate top 10 team (finally) against Oklahoma in the first half, the Bears were held scoreless and gave up 25 point lead to lose the game in the final minute. Even if they win the Big 12 in a lively rematch with the Sooners, I don’t think they have enough to get in to the playoffs.

From an overall perspective, it’s Alabama and what happened with Tua Tagovailoa. That hit he sustained in the first half against Ole Miss — just before the half and up four scores — was so severe many were comparing it to the injury that ended Bo Jackson’s legendary career in the pros. Nick Saban will figure something out, for sure, but you have to feel bad for Tagovailoa. He was on pace for his second Heisman nomination and had a bright future ahead at the next level. It’s yet to be seen how bad the injury will prove to be over time, but it’s a crushing blow for a team that has championship or bust motivations, year in and year out.

4. Which team has the toughest challenge? As hard as it is to imagine, Ohio State has a tough challenge this week facing a top ten Penn State team. The Nittany Lions had issues with Indiana a week ago, a team that the Buckeyes throttled earlier in the year by 40, but they are actually half of the challenge. The next three games for Ohio State are Penn State, a road game against rival Michigan and (potentially) the Big 10 Championship. For a team that has the best offensive/defense differential in the country (51 points per game on 9 allowed), this is a significant test to see if they have what it takes to win it all this year. They may also have to face Penn State without DE Chase Young, but with the way they’ve been playing all year they should be able to get it done.

5. Which team has the most to prove? Ohio State has nothing to prove (at least to me), but you could put them here. You could also put Georgia, who still have to do what they can to hold on to their fourth spot. I am, however, putting Utah and Oregon in this discussion. The top two teams in the PAC-12 are going to stay neck and neck for the conference title, and while only one can win, they both need to make their cases as to why they should be considered. The Big 12 has taken a hit with the Oklahoma loss, and anything can happen in the SEC, so big wins to finish the year can really make a difference. Aside from their loss at the beginning of the season to Auburn, Oregon has looked like a solid team and could garner attention if they finish undefeated in conference play.
SF
I love sports. If you’re reading this then you share that same sentiment. There’s nothing quite like watching your favorite team go up against a rival or compete for a championship. It gets even more fun if you can win cash or prizes because of your knowledge! But, do you know what’s better than winning money? Not losing money. Not even having to risk a dime actually! What a concept! We at Brag House think so too! Thus, we have made it easy and accessible for fellow bragger both new and experienced. Worried about losing your hard earned money on a close game? Forget about it! At Brag House, the only currency you need to worry about are Brag Bucks, which we supply, and, of course, bragging rights. So subscribe now to be the first to download when we go live Nov 5th -- and we will give you Brag Buck! Invite your friends or challenge that co-worker you don’t like - And we will give you Brag Bucks! It’s so easy your grandmother could do it, and after she beats you in a head to head matchup maybe she’ll send you some Brag Bucks for Christmas.
Share
0