Road to the Heisman 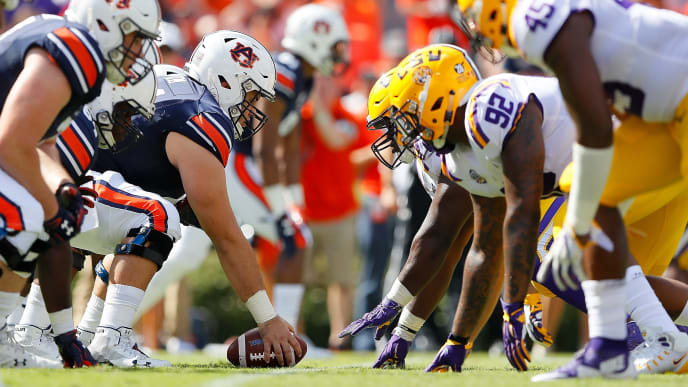 Think you know college sports? Brag House gives players a FREE chance to test their sports acumen to win cash and prizes. To get ready for each week, our in house expert Shea Freeman analyzes each AP Top 25 matchup and what to expect for the weekend; and gives you his predictions. Make sure you subscribe now for Brag House launch details and to get on the right side of the week!

#9 Auburn (6-1) at #2 LSU (7-0) - Sat. 3:30 ET (CBS) We have a hell of a matchup this weekend in Death Valley, as both teams are fighting for position in the ever competitive SEC West. LSU’s offense has been spectacular all year, while Auburn’s offense is also capable of putting up big plays. The key is going to come down to the play of both defenses. Auburn has the edge in that department, however they have yet to face anything like this LSU offense. If QB Joe Burrow wants to win the Heisman, this is his next hurdle. In the “Battle of the Tigers”, I like the home team.
Pick: LSU (-10.5)

#16 SMU (7-0) at Houston (3-4) - Thurs. 7:30 ET (ESPN) This game has the makings of a high scoring contest, with both defenses susceptible to giving up big plays. However, The Mustangs have a much better offense led by QB Shane Buechele and the Cougars are playing with a third string QB. SMU will put up the points, their defense should keep Houston in check in what could be a blowout by halftime.
Pick: SMU (-13)

#13 Wisconsin (6-1) at #3 Ohio State (7-0) - Sat. Noon ET (FOX) Wisconsin should be a little nervous. They had a hard time getting anything going against a bad Illinois team and now have to travel to Columbus to face arguably the best team in the country. Both teams have stout defenses, but Buckeyes QB Justin Fields is unlike any player the Badgers have faced this season. This one could get ugly if Wisconsin can’t move the ball down field with RB Jonathon Taylor.
Pick: Ohio State (-13.5)

#5 Oklahoma (7-0) at Kansas State (4-2) - Noon ET (ABC) The Sooners have been rolling through the Big 12 this season, averaging 45 points per game against conference opponents. In fact, Oklahoma hasn’t scored less than 34 all season long. By comparison, Kansas State only averages 14 points per game in the Big 12, surpassing 30 points just once in their last four games. The Sooner D has improved greatly over the season, and they keep on rolling this Saturday.
Pick: Oklahoma (-23.5)

#20 Iowa (5-2) at Northwestern (1-5) - Noon ET (ESPN 2) Iowa has had a tough string of games lately in which their offense could barely muster any scores. Luckily for the Hawkeyes, their next competitor has only one win on their resume and have been getting blown out at home. Expect them to get back in track this weekend and find the end zone more than they did the last three weeks.
Pick: Iowa (-9.5)

#6 Penn State (7-0) at Michigan State (4-3) - 3:30 ET (ABC) The Nittany Lions got off to a hot start against a pretty good Michigan defense, but their offense struggled to produce anything in the second half. Michigan St has underperformed all year, but they pose a threat at home in what could be a trap game for Penn State, especially with a meeting with Ohio State still on the horizon. However, the Spartans lack on the offensive side of the ball and Penn State should contain it.
Pick: Penn State (-6)

Maryland (3-4) at #17 Minnesota (7-0) - 3:30 ET (ESPN) The Gophers are off to their best start in fifty years and have a shot at playing in the Big 10 Championship. Their run to that game gets a little tougher over the next few weeks, starting with a Maryland team that has a pretty good running game and averages virtually the same statistics as Minnesota. This could be a trap game, but the Gophers are at home which should give them the edge.
Pick: Minnesota (-19)

Oklahoma State (4-3) at #23 Iowa State (5-2) - 3:30 ET (FS1) Iowa State is hot on a three game win streak, where they’ve averaged over 40 points per game during that stretch. The Cyclones have a decent defense, and they will at least try to contain Oklahoma State star RB Chuba Hubbard as best they can, but QB Bryce Purdy should take care of a bad Cowboys defense.
Pick: Iowa State (-10.5)

Arkansas (2-5) at #1 Alabama (7-0) - 7:00 ET (ESPN) Once again, Alabama is playing a primetime game where they will ultimately beat down their opponent. However, this time they will be without their star QB Tua Tagovailoa and instead will rely on sophomore QB Mac Jones to lead them to a win. Luckily for him, he has stud WRs Jerry Jeudy and Devonta Smith as weapons and is going against a Razorbacks team that allows 30 points a game. The Tide will roll, even if they don’t cover the spread.
Pick: Alabama (-31.5)

Boston College (4-3) at #4 Clemson (7-0) - 7:30 ET (ACC NETWORK) Dabo Swinney is not concerned with what you (or I) think about his Tigers team. They are still one of the best teams in the county — and the reigning National Champions — and this week I think they make a statement: move us back in the rankings all you want, but we’re still a damn good team. Boston College has a very good running attack led by RB A.J. Dillon, but the Tigers offense should feast on their defense to make up for it.
Pick: Clemson (-34)

#8 Notre Dame (5-1) at #19 Michigan (5-2) - 7:30 ET (ABC) This would have been my pick for Game Of The Week, if it not were for the fact that Jim Harbaugh has only one win against a top 10 team in his tenure as Michigan’s coach. This week they face a Notre Dame team that always seems to find itself fighting to be in the discussion for a playoff berth. I’m not saying Michigan has nothing to play for, but I think the Fighting Irish want this game more, as a loss would almost certainly ruin their shot at the postseason.
Pick: Notre Dame (-1)

Upset Alert
#24 Arizona State (5-2) at UCLA (2-5) - 7:30 ET (PAC 12 NETWORK) This is an interesting game. On the surface, Arizona State is the better team and should easily take care of a two win UCLA team. However, the Bruins have managed to stay in games thanks to coach Chip Kelly’s offense. The Sun Devils have some playmakers on offense, including RB Eno Benjamin, but they are relatively young and are facing a UCLA defense that had it’s best game of the year last week against Stanford. If the Bruins can maintain a balanced attack, I think they get the win at home.
Pick: UCLA (+3.5)

Cal (4-3) at #12 Utah (6-1) - 10:00 PM ET (FS1) Utah won a very convincing game last week against a pretty good, albeit young Arizona State team and this week they take on a team that is offensively challenged, the Cal Bears. The Bears only average 19 points on offense, but they match that with a defense that is giving up only 18 a game. Utah’s offense can be a little underwhelming at times, and I expect this game to be a low scoring affair, but I think the Utes are hot right now and are setting themselves up for a Pac-12 run.
Pick: Utah (-21)

Washington State (4-3) at #11 Oregon (6-1) - 10:30 PM ET (ESPN) Oregon’s defense faced it’s toughest opponent last week against Washington and now they face another Washington team that loves to throw the ball, and does so at a high clip. Cougars coach Mike Leach’s Air Raid attack has been dominant despite the 4-3 record would suggest, but this Duck’s defense can make plays. The Cougars don’t have a great defense, and give up 150 yards more per game than the Ducks do. QB Justin Herbert should have another big game for Oregon at home.
Pick: Oregon (-14)
SF
I love sports. If you’re reading this then you share that same sentiment. There’s nothing quite like watching your favorite team go up against a rival or compete for a championship. It gets even more fun if you can win cash or prizes because of your knowledge! But, do you know what’s better than winning money? Not losing money. Not even having to risk a dime actually! What a concept! We at Brag House think so too! Thus, we have made it easy and accessible for fellow bragger both new and experienced. Worried about losing your hard earned money on a close game? Forget about it! At Brag House, the only currency you need to worry about are Brag Bucks, which we supply, and, of course, bragging rights. So subscribe now to be the first to download when we go live Nov 5th -- and we will give you Brag Buck! Invite your friends or challenge that co-worker you don’t like - And we will give you Brag Bucks! It’s so easy your grandmother could do it, and after she beats you in a head to head matchup maybe she’ll send you some Brag Bucks for Christmas.
Share
0